From Wikipedia, the free encyclopedia
For other uses, see Biceps (disambiguation).

In human anatomy, the biceps brachii (/ˈbaɪsɛps ˈbræki.aɪ/ ), commonly known as the biceps, is a two-headed muscle that lies on the upper arm between the shoulder and the elbow. Both heads arise on the scapulaand join to form a single muscle belly which is attached to the upper forearm. While the biceps crosses both the shoulder and elbow joints, its main function is at the latter where it flexes the forearm at the elbow andsupinates the forearm. Both these movements are used when opening a bottle with a corkscrew: first biceps unscrews the cork (supination), then it pulls the cork out (flexion).[1] 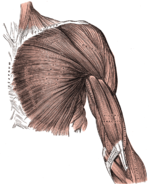 Deep (left) and superficial (right) muscles of the chest and arm; the short headof the biceps originates from the coracoid processat the top of the scapula. The long head originates from the supraglenoid tubercle just below the shoulder joint, from where its tendon passes up along the intertubercular grooveof the humerus into thejoint capsule of the shoulder joint. [1]

Both heads join on the middle of the humerus, usually near the insertion of the deltoid, to form a common muscle belly. Distally, biceps ends in two tendons: the stronger attaches to (inserts into) the radial tuberosity on the radius, while the other, the bicipital aponeurosis, radiates into the ulnar part of the antebrachial fascia. [3]

The tendon that attaches to the radial tuberosity is partially or completely surrounded by a bursa; the bicipitoradial bursa, which ensures frictionless motion between the biceps tendon and the proximal radius during pronation and supination of the forearm.[4]

Traditionally described as a two-headed muscle, biceps brachii is one of the most variable muscles of the human body and has a third head arising from the humerus in 10% of cases (normal variation) — most commonly originating near the insertion of the coracobrachialis and joining the short head — but four, five, and even seven supernumerary heads have been reported in rare cases. [5] The distal biceps tendons are completely separated in 40% and bifurcated in 25% of cases. [6]

Biceps brachii is innervated by the musculocutaneous nerve together with coracobrachialis and brachialis; like the latter, from fibers of the fifth and sixth cervical nerves. [7] 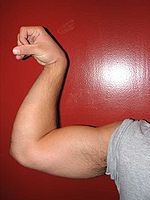 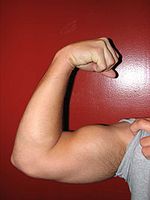 The biceps is tri-articulate, meaning that it works across three joints.[8] The most important of these functions is to supinate the forearm and flex the elbow.

These joints and the associated actions are listed as follows in order of importance:[9] 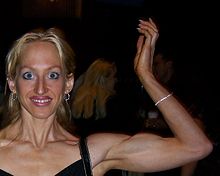 The proximal tendons of the biceps brachii are commonly involved in pathological processes and are a frequent cause of anterior shoulder pain.[10] Disorders of the distal biceps brachii tendon typically result from partial and complete tears of the muscle. Partial tears are usually characterized by enlargement and abnormal contour of the tendon.[11] Complete tears generate a soft-tissue mass in the anterior aspect of the arm, the so-called Popeye sign, which paradoxically leads to a decreased strength during flexion and supination of the forearm.[12] Tears of the biceps brachii occur in athletic activities and corrective surgery repairs biceps brachii tendon tears. Proximal ruptures of the long head of the biceps tendon can be surgically repaired by two different techniques. Biceps tenodesis is resurfacing the tendon by screw fixation on the humerus and biceps tenotomy is trimming the long head of the biceps tendon promoting the muscle origination from the coracoid process. Preexisting degeneration in the tendon can cause partial tears called lesions and are rarely associated with a traumatic event. The most common symptom of a biceps tear is pain. It will be the most severe in the muscle, but may stretch to the shoulders and elbows as well. Treatment of a biceps tear depends on the severity of the injury. In most cases, the muscle will heal over time with no corrective surgery. Applying cold pressure and using anti-inflammatory medications will ease pain and reduce swelling. More severe injuries require surgery and post-op physical therapy to regain strength and functionality in the muscle. Corrective surgeries of this nature are typically reserved for elite athletes who rely on a complete recovery.[13]

The biceps are usually attributed as representative of masculinity within cultures.

The biceps brachii muscle is the one that gave all muscles their name: it comes from the Latin musculus, "little mouse", because the appearance of the flexed biceps resembles the back of a mouse. The same phenomenon occurred in Greek, in which μῦς, mȳs, means both "mouse" and "muscle".

The term biceps brachii is a Latin phrase meaning "two-headed [muscle] of the arm", in reference to the fact that the muscle consists of two bundles of muscle, each with its own origin, sharing a common insertion point near the elbow joint. The proper plural form of the Latin adjective biceps is bicipites, a form not in general English use. Instead, biceps is used in both singular and plural (i.e., when referring to both arms).

The English form bicep [sic], attested from 1939, is a back formation derived from interpreting the s of biceps as the English plural marker -s.[14][15] While common even in professional contexts, it is often considered incorrect.[16]

The biceps can be strengthened using weight and resistance training. Examples of well known biceps exercises are the chin-up and biceps curl.

To isolate the biceps brachii in elbow flexion, place the shoulder in hyperextension.

There is much debate over the best biceps workouts for targeting each of these heads.

The first theory for targeting is based on the proximity of the arms in relation to the body. It is said that when the elbows are pulled back behind the body, this targets the long head more. To target the short head, the elbows should be in front of the body.

Leonardo da Vinci expressed the original idea of the biceps acting as a supinator in a series of annotated drawings made between 1505 and 1510 (referred to as his Milanese period); in which the principle of the biceps as a supinator, as well as its role as a flexor to the elbow were devised. However, this function remained undiscovered by the medical community as da Vinci was not regarded as a teacher of anatomy, nor were his results publicly released. It was not until 1713 that this movement was re-discovered by William Cheselden and subsequently recorded for the medical community. It was rewritten several times by different authors wishing to present information to different audiences. The most notable recent expansion upon Cheselden's recordings was written by Guillaume Duchenne in 1867, in a journal named Physiology of Motion. To this day it remains one of the major references on supination action of the biceps brachii.[citation needed]